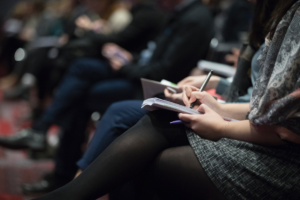 Having an ethical employer is a top priority

Working for an ethical company is more important to jobseekers in the Midlands than salary or promotion prospects, according to a major employment market report.

The 14th annual Blue Book survey, led by Birmingham-based recruitment firm Katie Bard and its parent company the Angela Mortimer Group, revealed that 51 per cent of candidates in the Midlands rank an ethical employer as their top criteria.

The ethical, environmental and CSR credentials make an employer more attractive to those in the region ahead of an equal 47 per cent putting career progression and working environment in their top three reasons to join a company – and an above average salary sitting at less than 40 per cent.

Verity Stokes, director of Katie Bard, said: “If you look at what attracts candidates in the Midlands to a company, the big one this year is ethics which is surprising. It has shot up from being the sixth to the leading requirement of what makes an employer attractive.

“The top three criteria of ethics, progression and environment sit above a better than average salary for candidates.

“Interestingly, whilst employers consider a positive working environment, career progression and above average salary as what matters most to candidates, they only rate ethical, environmental and CSR as seventh.

“This shows that in order to be successful in finding talent in this competitive market, companies need to understand what attracts a potential hire, and must consider their branding and whole package to secure the best.”

Around 70 per cent of companies in the Midlands expect headcount growth in 2018 and although the majority of jobseekers share the confidence, none of the 18 to 20-year-olds surveyed felt positive about their prospects compared to 100 per cent of 36 to 40-year-olds.

Similarly, 100 per cent of 36 to 40-year-old jobseekers are expecting a salary increase this year as opposed to none in the 18 to 20 age bracket.

Verity said: “We have a lot of young people in the Midlands who are negative about their opportunities which is really worrying. It suggests that perhaps companies aren’t engaging with them as best they can and also that we are not seeing the impact that we should be seeing from initiatives and changes to legislation such as the Apprenticeship Levy.

“We have already seen an increase in the temp to perm business and anticipate seeing this approach benefiting candidates with minimal experience. If companies can bring people in early and develop them through, they are more likely to get a better return on investment and retain them.

“However, attracting these experienced first jobbers into permanent positions will require more holistic thinking from businesses. This is no longer just about the tangible financial benefits but the progression, support, training and development a company offers – and, of course, how they are seen ethically.

“The key to 2018 will be for businesses to invest more in the career development of their staff and for candidates to use this commitment to gain opportunities within the most successful companies in the next decade.”

London
35000
Are you ready to be a point of contact for all HR inquiries and to support with payroll?This role will be supporting my client during this very busy time, therefore your experience is key!You ideally ...
More Information

london
Up to £55,000
A thriving, City based tech consultancy is looking for an experienced Executive Assistant with a tech background to join immediately. Supporting the CEO on a 1:1 basis, in both a business and private ...
More Information

London (City of London)
Up to £70k
My client is a global company within the professional services sector and is looking for an HR Business Partner with a focus on supporting with rewards management, for a 12-month contract. You will l...
More Information