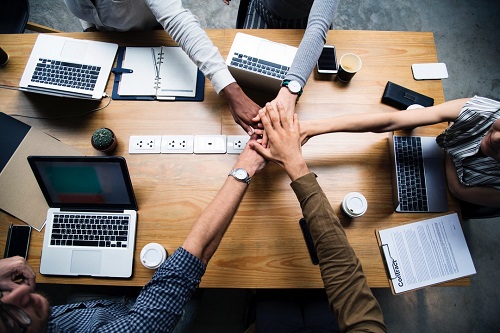 Two graduates who started out on reception at Birmingham’s Katie Bard have been made directors of the specialist people management and recruitment company.

Verity Stokes and Kam Vara have been promoted from divisional leaders in their latest progression with the company which has seen them rise through the ranks over the last 16 years.

They both joined Katie Bard, part of the Angela Mortimer Group, as operations co-ordinators after graduating from Birmingham University.

They followed the same path with promotions to the roles of consultant, team leader, divisional leader – and now directors on the board of Katie Bard.

Kam graduated with a Law degree and went on to complete a Masters in HR and Business at Aston University, and Verity’s degree was in History and English. Neither had considered a career in recruitment until joining Katie Bard.

Kam specialises in legal and property, as well as general commercial support.

She said: “I’m delighted to be offered a director position as it’s something I have been working towards throughout my 16 years with Katie Bard. We have a fully empowered environment which means you get out what you put in.

“Having two directors appointed who were both once graduates just shows the progression and culture of the business. Within my new role, I will be spearheading further progression for Katie Bard.”

During her time with Katie Bard, Verity has helped to establish the Angela Mortimer Group Graduate Recruitment Programme and its graduate recruitment website AM CityGrad. She won Birmingham Young Professional of the Year in HR, Recruitment and Training in 2015.

She said: “It is a wonderful opportunity to be able to reap the rewards of building the business to equity level.

“We have unrivalled training and development and a unique career development plan that is put in place for every new starter to help them plot their career through to equity.

“We are also incredibly lucky to have leaderships from our Group board that gives us the freedom as well as support to run our own businesses from day one. This autonomy and responsibility is an essential aspect of being able to attract and retain the calibre of consultants that we have.

“Without this plan and scope for development, my time here might have only been the 12- month stopgap I had initially planned it to be!”

John Mortimer, CEO and co-founder of the Angela Mortimer Group, said: “These are two directors and equity partners who started with us on our graduate entry scheme.

“We are proud of their fantastic achievement which reflects the opportunity for progression within our company. Approximately 60 per cent of our senior leaders started the same way, and a similar percentage of our entire workforce.

“We create an empowered environment, with facilitation, training and opening up opportunities for self-development, and a no ceiling approach to personal ambition. A culture of want to and can do at its best has grown up spontaneously around this.”

Mayfair
£55,000
We have an incredible permanent opportunity to work for a developing Real Estate Investment Firm. This will be a dual role as an Office Manager and a Personal Assistant.The company is based in Mayfair...
More Information

Central London
£45,000 - 55,000 + bonus + hybrid working
A highly dynamic and forward-thinking Consultancy is looking for a pro-active, diligent and strong team player to support 2 inspirational partners. This is a fast-paced, traditional EA position where...
More Information

Want to work in a sociable investment company as a Team Assistant?

Piccadilly
£35,000
We have an international investment company seeking a Team Assistant to join their fast paced and outgoing environment. The ideal candidate will have a couple years experience working as an office ad...
More Information